3D printers used to be horribly expensive. But now? You can get a 3D printer dirt cheap (think $100-$300) yet still get performance far superior to older printers.

If you’d like both affordability and top-of-the-line quality, the Creality Ender series (Ender 3, Ender 3 Pro, Ender 3 V2, and Ender 3 S1 – listed from cheapest/oldest to most expensive & newest) is great.

Ender 3’s have good parts and great printing speed for their price.

When I picked up mine the first thing I thought was “how can I make my Ender 3 v2 print faster.”

Fun fact: as of this writing the fastest Ender 3 can print at over 1000 mm/s and print a Benchy in under four minutes instead of the typical 1.5 hours it usually takes.

But for those of us with a stock or slightly modified Ender 3, our print times are much, much slower than 1000mm/s.

So what’s the Ender 3’s print speed and what print speed settings should you use for the best print-to-quality? 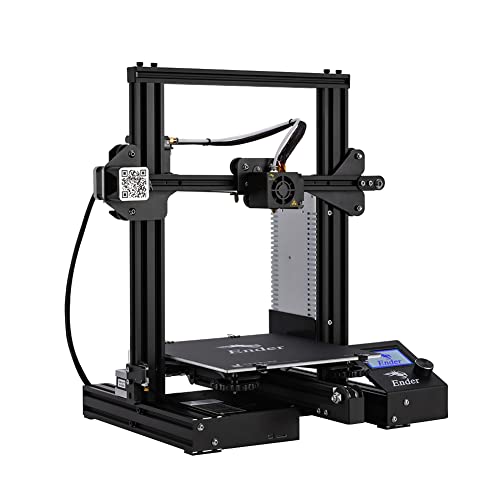 There is no ‘one size fits all’ print speed. This is because there are quite a few settings related to printing pace.

In most slicer engine software programs, “printing speed” is a setting that used to calculate various settings that will decide how fast the nozzle will move.

Here we will refer to speed as the least amount of time needed to create a part when the machine is set to its fastest speed setting. Let’s assume we’ll use the default calculations to derive the other speed settings just like various other printers using a similar-sized printer bed.

What is the fastest the Ender 3 Pro can print?

Creality lists the mechanical max print speed for a stock Creality Ender 3 3D printer as 200 mm/s. The maximum print speeds are really dictated by the flow rate from your hotend and are usually 8mm³/s to 12mm³/s, depending on your hotend setup. These flow rates translate to 90-100mm/s and 140-150mm/s (respectively) at 0.2mm layer height with a 0.4mm nozzle depending on how your slicer handles the math.

The max speed also depends on the type of filament you use, what STL/model you’re building, and how nice you’d like the part to look.

But if you really want to have an incredible print speed, learn how to build a 1000mm/s Ender 3 for under $600.

What is the fastest the Ender 3 Printer can realistically print?

The fastest you can print depends on:

For example, PLA would give you 60 mm/s while other filaments would have their own ranges. Keep scrolling for stock (0.4mm nozzle, 0.2mm layer height) speeds for your Ender 3 based on material or

Recommended Print Speeds for a stock Ender 3 (Pro/V2) with 0.4mm nozzle by material

Here’s a good starting point for your print speeds depending on the material.

† Max flow rates can vary even if both are the same model. Keep scrolling for how to calculate the max flow rate (which is the most critical number to find your max travel speed).

* For printing TPU keep all speeds constant. Also, Ender 3’s use a Bowden tube – meaning there is a lot of distance between extruder gears and the print head for TPU to “lock-up”… so print slow and test often. See printing with TPU for details as it’s hard to work with.

** Stock Ender 3’s, Ender 3 V2s, and Ender 3 Pros really can’t print PC, PEEK, or other high-temp filaments for two reasons. First PC and PEEK warps horribly unless you have an enclosure that can hold the part at least 80°C. Second, the melting point of PEEK is roughly 343°C and PC’s melting point is typically at least 270°C but the max (safe) Ender 3 nozzle is 240°C.

How fast can I print PLA?

PLA prints well at speeds between 30mm to 90mm per second. For high-quality results stick to lower printer speeds – around 30-50mm/s. As you increase the speed you begin to risk reduced quality prints when printing for high detail.

PLA is typically the first (and often the best) filament you’ll print with. It’s derived from plant starches and smells like cooked pancakes.

PLA is easy to print with it and mistakes you can fix mistakes rather easily.

Most of my normal (non-high detail) PLA prints are done at 60mm/s on the perimeters, 25mm/s for small perimeters, 35mm/s for external perimeters, and “200mm/s” (which ends up programmatically limited by Prusa Slicer to ~100mm/s) for infill.

TPU and other flexible materials usually build at much slower speeds when compared to PLA due to being soft and flexible. Because stock Enders use a Bowen extruder setup instead of direct-drive – filament can “bunch up” in the tube.

This can make it very hard to print with TPU and decreases the pace substantially. Plan on printing flexible materials slowly, sometimes as low as 15 mm/s up to 25 mm/s.

Here’s a great recommendation for pristine TPU prints on an Ender 3, posted on Reddit:

PETG (aka PET-G) is a 3D printing filament that prints at a higher temperature than PLA. It has fantastic mechanical properties (similar to ABS) but the print difficulty is slightly harder than PLA.

As a general rule, print PETG at roughly the same pace – or slightly slower – than PLA. If you create basic objects at low res you will be able to get it to create as fast as 60 mm/second. However, the best pace for PETG is approximately 40 mm/s since PETG can be a bit stringy.

You can usually eliminate stringy-ness by slowing your print speed.

Apart from the filaments used, there are also many other factors that are responsible for printing pace variations.

Size and Complexity of the Model

Imagine trying to paint the Sistine Chapel in a day. To print more detailed models you’ll need to slow your print speed. For an Ender 3 (pro/V2) plan on 40 to 50 mm/s for detailed builds or as high as 70 to 80 mm/s for rough models and builds.

Ender 3’s Limitations: The Design of the printer

While the max speed as per the tech specs is 200 mm/s it is not possible to actually run that fast without heavy modifications. Basically, Creality advertised the travel speed rather than the actual printing speed.

Then there are the personal quirks of the machine to consider. It’s not nearly as easy to level as other machines that include mesh bed leveling sensors. You often need to re-level it after every few prints and it might not maintain a level bed for long.

To find the max speeds for your printer, you need to first find the maximum volumetric flow rate for any given combination of nozzle size, material, and speed. You first pick a filament and temperature, then manually feed Gcode to your printer pushing more and more filament until it eventually starts clicking.

Every hotend is limited by how much energy (heat) it can send to the filament to melt it.

Hotend temperature will temporarily drop if you try to shove filament through faster than the hotend can heat it. When the hotend temp drops you’ll get under-extrusion, extruder clicking, and uneven print widths.

It’s gonna be a bad time.

How fast can the Ender 5 print?

The printing pace of the Ender 5 is faster than its Ender 3 3D printer series counterparts. Depending on the material you can usually print at around 80mm/s and craft high-quality models without compromising the overall quality of your prints.

How to make the Ender 3 print faster

Can the Ender 3 print metal?

No, no hobbyist printer can print full-metal. These Ender 3 series printers are best with PETG, TPU, PLA, due to their lack of an enclosure (I’ve had difficulty printing ABS). You can print with metal-laced filaments, though.

There are no universal speeds for 3D printers and the general rule is “slow” (~40mm/s).

They are dependent on the filaments and personal quarks of the specific printer when it comes to build times.

To optimize the pace of your printer, keep the machine well-tuned and experiment with it to find the optimal settings for your 3D printer.

Also, if you want to increase your print speed be sure to:

And it wouldn’t hurt to print a better part-cooling system.

Good luck and be sure to check out our build where we’re aiming to print at over 1000 mm/s for less than $600 including the cost of the printer (or, at least print a benchy in under 10 minutes for that price).

Learn how to make money 3D printing and turn your hobby into your main income.