So, you’re doing your research and looking for the best Ender 3 Pro review? If you’re wondering “is the Ender 3 Pro good for beginners?” the answer is… kinda. The Ender 3 Pro is the printer that finally made 3D printing accessible to the masses with a sub-$300 price point. But it also lacks many quality-of-life features that are starting to be included on other printers.

So, in this review of Creality’s Ender 3 Pro, we’ll look at what’s good, what’s not, and hopefully help you make a decision on if a Creality Ender 3 Pro is right for you. 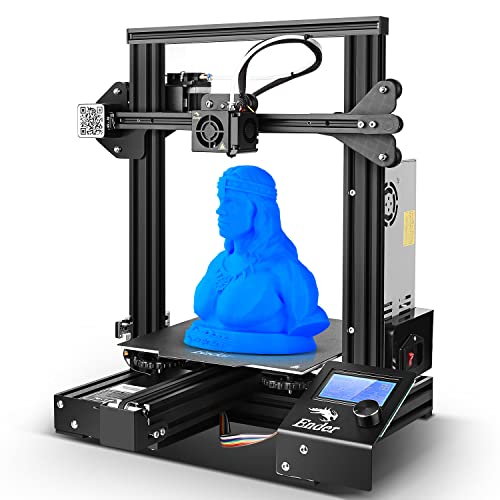 Is The Ender 3 Pro Worth It?

The Ender 3 Pro is one of the most well-known (and cheapest) 3D printers under $300, but does that mean that it is worth the amount you spend on it? I’d say, proceed with caution.

It’s not a bad printer but Creality is starting to get lax on its quality control. Creality has also made the Ender 3 line confusing with printers named the: Ender 3 Pro, Ender 3 v2, Ender 3 Max, Ender 3 S1, Ender 3 S1 Pro, and now “Neo” versions of all the above (and probably a few that I’m missing).

So I’ll do my best in this Ender 3 Pro review to help you understand if it’s right for you.

The very first thing we will observe in this is Ender 3 Pro review is that this machine is a definite step up from its Creality Ender 3 younger brother. This is not just a simple upgrade, but rather it boasts of an entirely new range of features that are not available on most other Creality models.

Regardless of its budget price, this is a very high-quality printer. It more than meets the grade when it comes to the following capabilities:

The unit has been suitably well-equipped with a very sturdy 40×40 aluminum extrusion. It has been designed for the machine’s Y-axis and provides much greater stability.

Apart from that, this 3D printer’s very large bearings provide a certain level of stiffness. One that aids in greatly reducing friction.

Here, it is important to understand that this machine while being a highly affordable 3D printer in its own right is not quite in the same league as the really expensive professional-level printers out there. It is certainly an amazing tool if you are interested in tinkering or creating really nicely made miniatures and it will also serve students and other beginners pretty well.

But if you are a professional there is no point in going for this machine. In fact, you would be better off going for something above the $1000 range.

This way, you will have both very high speeds as well as very high-quality prints. The Pro delivers very well in its own niche as a great entry-level printer. However, if your needs don’t fit this niche, you might consider something along the lines of the Prusa i3 MKS+.

Ever since its inception, the printer has quickly garnered a dedicated fan following. As of now, there are plenty of fresh upgrades and mods that are now available, courtesy its extensive community of followers.

In fact, just simply typing ‘Creality Ender 3 Pro” on your browser or YouTube account will bring up a truly massive number of mods and tweaks available for this model. As of now, there exists a veritable plethora of online model repositories such as Thingiverse and MyMiniFactory that have multiple printable upgrades for the Creality Ender 3 series.

If you are not particularly keen on printing upgrades, you can always buy them from the good people at Creality itself. The company has started retailing a line of plug-and-play and easy-to-install board upgrades along with other important components such as auto-leveling sensors (for instance) for their Ender 3 series.

If you have the DIY (do it yourself) skills to assemble an Ikea shelf, you will probably be able to assemble the Ender 3 pro kit.

The good people at Creality have tried their level best to make the whole assembly process as easy and as painless as possible. Every part has been very clearly labeled, so the new user won’t have to guess which part goes where.

There is an excellent and comprehensive step-by-step instruction sheet for assembly procedures and it is part of the kit. If you still have any problems you can use the manuals and troubleshooting tips and guides that are available on the SD card included with the Ender 3 Pro kit.

In case of any further issues, you can always check out the video created by Creality so that you will be able to assemble it safely and easily.

It takes roughly two hours or so to unpack and build your very own Ender 3 unit. Both the X and Y axes come pre-built so you need not worry on that score at least. All you have to do is to mount the Z-axis.

The Ender 3 Pro kit has a set of tools so you won’t have to go to the nearest hardware store to build your machine. The instructions brochure is complemented by an 8GB gigabyte SD card. Everything is well-packed in layers of plastic so there is no chance of any breakage during transportation.

Design Features of the Ender 3 Pro

The design of the Ender series has been created keeping in mind the ‘value for money’ proposition. There is no doubt that many, if not most people buy the Ender 3 series printers thanks to their incredibly low (under $300) price point.

Just like the Creality CR-10, the Ender 3 Pro also has a frame that has been made from aluminum extrusions. Here, a single lead screw acts to drive the unit’s Z-axis on the left side of its frame. The Creality Ender 3 Pro has a close loop instead of an open one.

Like its regular 3 counterparts, the Pro also features a pretty generously sized (for its price point) heated print bed that measures 220 x 220 x 250mm. This is nearly double the size of the Ender 2 series and it is more comparable to a top-of-the-line Prusa i3 Mk3 that boasts of an impressive 250 x 210 x 200 mm print bed size.

Creality Ender 3 Pro’s frame has an LCD display on its right-hand side and it comes complete with a clickable control wheel. However, the control board is not covered. This is why it would be a very good idea to get a decent cover mod as the very first print on your Ender3 Pro 3D printer.

The interface of the machine is by far and large the same as the various 2, 3, and 5 series 3D printing machines manufactured by the company. It is as user-friendly as most of the other printers in its class and price range.

This is an open-source printer and you will have to search online for its advanced blueprints.

What is the difference between Ender 3 and the Ender 3 Pro Printer?

Many first-time buyers are confused about these two nearly identical printers. In fact, this is one of the most commonly asked questions regarding these two printers. Let us check out the key differences between these two stalwarts of the Ender 3 family of 3D printing machines:

The Ender 3 Pro 3D printer has been freshly redesigned from the ground up and it comes with a sturdier 40×40 aluminum extrusion built exclusively for the Y-axis base. Actually, Creality’s design engineers really wanted to improve the overall stability of their machine and they have definitely succeeded in this endeavor.

Apart from the extrusion, the larger load-bearing wheels deliver a stiffer platform even as they reduce friction. This improves overall dimensional stability. Finally, a broad set of rubber feet also aids in reducing the noise level during the printing process.

The Ender 3 Pro printer has been suitably equipped with a state of the art “C-MAG” magnetic printing bed. The bed’s printing sheet is both removable and flexible.

In the long run, this allows you to simply pluck off your finished 3D prints from the build plate both conveniently and easily. This is thanks to the unique textured surface that helps the critical first layers to stick to the bed during the printing process.

Another really cool feature of the Creality Ender 3 series is its innate ability to not only fully recover but also resume printing where it left off, in case of a power outage or accidental disconnection. This function had hitherto been available in top-end models and the Pro is one of the first budget printers to include this really important feature.

Does Cura work with Ender 3 Pro?

Yes. In fact, Cura is usually the preferred slicer for an Ender 3 Pro. The 3D slicer settings for the Ender 3 Pro have been designed for use by even the least knowledgeable users, effectively making them ideal for students and newbies alike.

The Pro comes with an SD card that contains the Cura 3D slicer software tool. However, this version can be used only on a Windows run ecosystem. But the Mac and Linux versions can be directly downloaded from the Ultimaker website and work great.

As a general rule, Cura works pretty well on the Pro and you won’t need to tinker around the default settings as such. There is a dedicated profile for the 3 Pro and you can simply get to work once you load it onto your system. If Cura is not your thing you can also download Simplify 3D and it will also give you excellent results since it too, has a dedicated profile for this model.

Yes, unlike many of its counterpart printers the Pro is indeed a 24v machine.

Verdict: Should you buy an Ender 3 Pro?

While it’s a great tool for miniature makers and ardent hobbyists – it’s not witout quirks. It’s usually pitched as the best 3D printer for beginners but without some of the features below, it can be a steep learning curve. If you are well versed in 3D printing you will be able to get genuinely astonishing quality prints for the price, though.

However, if you intend to get this 3D printer professionally then the Ender 3 Pro might not be what you need and want. It’s a tinkerer’s machine – and not reliable enough for industrial use.

Still, this machine has ironed out some of the flaws of the original Ender 3 3D printer and it is an extremely hackable machine and offers good print quality for its price. With a magnetic bed, a build volume of 220 x 220 x 250mm, a power recovery mode, and a 24V power supply it’s a decent place to start.

However, there are still areas for improvement.

The magnetic bed of the Creality Ender 3 Pro, for instance, could use replacement, especially if you intend to do a lot of 3D printing.

An auto-leveling feature is super helpful since manual leveling is one of the single most difficult and frustrating tasks in the 3D printing world. Adding a was best of all my recommended upgrades for an Ender 3 Pro.

Also, the extruders for the Ender 3s are made of plastic with a tendency to crack underneath the extruder arm. This makes it very frustrating to figure out why your prints aren’t working right. It’s the worst when everything looks ok but you’re actually not getting great pressure from the extruder.

Once you get the hang of the machine these issues can take a back seat as you put your Creality 3 Pro 3D printer through its paces to create some truly awesome builds.

2 thoughts on “Creality Ender 3 Pro Review: An Excellent 3D Printer To Start With”