Let’s see, where to start?

I used to have a stock, slow, boring Ender 3 V2 and now I can technically print a Bency in under 4 minutes.

I’ll do the math for you, that’s 5.7 times more plastic pumping out of my printer in the same amount of time.

52mm^3/s is technically fast enough to print a benchy in under 4 minutes.

Of course, at those speeds flow rate is no longer what limits your print speed.

But we’ll get to that.

(And yes, here’s proof that a Benchy can be printed in sub-4 minutes, first accomplished by 3DPrintFun.)

So, how do we build a printer that can print at 1000 mm/s without breaking?

There are four main things you need to do to 3D print at crazy fast speeds.

Depending on if you get a deal on your starting printer, you should be able to do all of this and buy the printer for under $600.

Let’s start at the first bottleneck to print speed and look at a low-cost way of boosting speeds by 33% – even if you ignore everything else.

how to Increase print speed – boost your volumetric flow rate

The volumetric flow rate is the total plastic you can push through your hotend.

And your hotend setup and extruder are the first major bottlenecks caused by most 3D printers, especially Creality Ender 3’s and Ender 3 clones.

Here’s what you need to do to boost your flow rate:

No, you can’t get them on Amazon.

The CHT nozzle uses a patented (and super cool) design that splits your filament into three smaller pieces.

By splitting filament into smaller pieces there is more surface area touching your heating element. That means you can heat the center of the filament easier, allowing you to push 30% more filament.

For a friggin’ $20 and the time it takes to change a nozzle.

I could keep going but you should just go get one at Slice Engineering if you plan on upgrading your hotend to a V6 style mount like the ones I recommend below (you should).

If you’re sticking with a stock Creality “MK8” hotend you can get a CHT for it direct from Bondtec.

The CHT is offered in both but they’re not interchangeable.

Next, you’ll need to upgrade your hotend.

It comes in high flow and Ultra High Flow.

The high flow comes with a “Volcano” length nozzle and a collar, allowing for a larger melt zone.

Go UHF if you’re not planning on getting the CHT.

If you do get the CHT, it doesn’t matter if you go high flow or ultra high flow – you’ll be swapping out the nozzle anyways.

But what’s so special about the Rapido (especially if you’re changing the nozzle)?

See the white cylinder just above the nozzle?

This allows a much more direct heat transfer and heats up in literally 10 seconds from dead cold.

Last up, the extruder.

The stock extruder on an Ender 3 series (up until the Ender 3 S1 printers) is trash.

If it’s not cracked, it will be.

Also, the teeth on the extruder gears are flat and crap.

After a ton of research and trying to talk myself into the Alibaba drop-shipped “red” all-metal extruders, I just couldn’t do it.

It’s clear that most of the Amazon/Alibaba reviews are fake and the ones that aren’t had major issues within a month or two.

We need speed, and speed demands a tight grip on our filament so the extruder can push hard.

So I went with the Micro Swiss Bowden Dual Gear Extruder. It’s the only thing I really couldn’t compromise on budget. 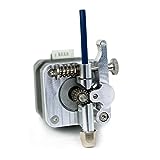 Now, the right thing would be to buy a direct drive extruder with built-in pancake motor.

And it might be the way I have to go.

But for now, we’re seeing how far we can get on a Bowden setup as it saves considerable mass off of the print head.

You can reuse old wiring but be sure to match new voltages or use a step down buck converter to turn the stock 24v into 12v.

As of now, this is where I am. I’ve included some resources for you to use as I continue researching and testing.

There are always another few grams you can shave off your weight.

The Creality Ender 3 V2 comes with a glass bed weighing in at ~510g. The problem is, at high speed that’s a lot of mass to be throwing back and forth on your Y-axis.

My first crack at fixing this was to buy the official Official Creality Flexible Magnetic PEI Sheet.

It cut ~180g off of my weight but I think we can still do better and it seems there are several new, cheaper, and (possibly) lighter options: 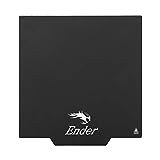 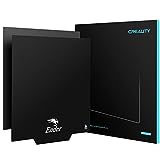 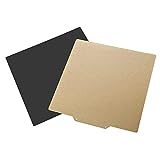 At high speeds there’s one thing for certain: you’re going to smoke the V-wheels on a stock Ender 3 series printer.

I’m currently testing various linear rails. While Amazon has several options (top 3 listed below) but they can be hit-or-miss, so we’ll be looking into other vendors’ options as well. 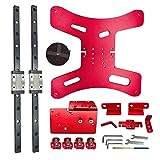 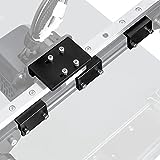 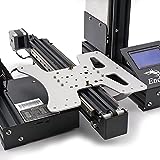 Be sure to sign up for updates as we work.

Until then, check out this printer by 3dprinterfun hitting 1000 mm/s.