The Longer Orange 10 is a budget resin 3D machine that has been developed for the beginners’ market.

Today’s variety of budget printers in the resin printing world is now part of a new class of consumer 3D printing machines. They present a whole new world of really exciting opportunities in the 3D printing world at a relatively low cost. They even give market leaders such as the Creality Ender 3 or the Anycubic Photon printers a run for their money.

This is partly due to the fact that they are highly accessible for a complete beginner in the 3D printing arena. Add to that the fact that they pack a really strong price to performance ratio. As a matter of fact, it would not be wrong to assert that some sub-$300 machines can match the performance of many SLA 3D printers that are almost double their price.

This printer also gives the FDM Printer market a run for its money, as you will see in any number of reviews. 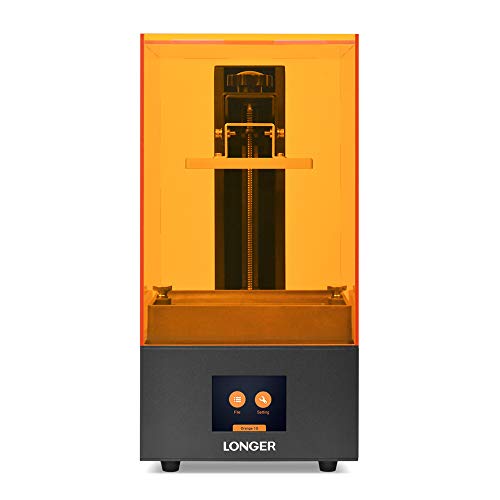 In this review, (and other reviews) we will take a closer look at the Longer Orange 10 and see what makes it a great 3D machine. This is a lesser-known LCD screen equipped resin 3D printer that lays claim to introducing you to the world of 3D printing for a bargain-basement price.

It has been suitably well equipped with smart support generation, touch screen, and very fast proprietary slicer software. After reading this 3D printer review you might consider this 3D printing machine to be perfect for your early steps in the word of resin 3D printing.

The Longer Orange 10 sla 3D printer comes with some really durable packaging to ensure that the 3D printer doesn’t get damaged during the whole shipping process. However, removing the printer from the box proved to be quite easy. A key thing we would like to mention in this 3D printer review is that there are plenty of accessories to look out for, once you have the package in your hands.

The manufacturer of this Orange 10 sla resin printer gives you a 250 ml bottle of resin. This way, you can start to print right away. But this is not all, since you will also get a new pair of gloves that will handle the resin, along with a large steel scraper, a power adapter, and a vast assortment of tools to go with it.

Add to that the fact that this 3D printer features a release film, two filter funnels, as well as a lone TF card.

You will be able to set up your Longer Orange 3D printer in no time at all even though it will still require at least some sort of initial calibration.

Unlike many of the higher-end and expensive 3D printers in the market, the Longer Orange 10 does not come with an automatic leveling feature. Neither does this machine come pre-assembled. Of course, this means that the responsibility of manually leveling the platform will rest on you.

Although this may sound like a bit of a hassle at first, it’s not that bad, to be honest. After all, it might please you to know that manual leveling will allow you to better customize your Longer3D Orange 3D printer based entirely on your own personal preferences.

Many newbies might have a problem when using the automatic leveling feature that is standard in high-end brands since it is difficult to work it properly.

Most enthusiasts who have purchased the Longer3D Orange 10 sla can securely and easily level the print platform in less than twenty minutes or so. Loading the first resin into its vat is also quite easy; this holds truer for people who might already have at least some experience in working with any sort of resin-based 3D printer.

Nevertheless, if you are very new to resin 3D printing, it is always extremely important to be very cautious and avoid any sort of spills whatsoever. Printing with resin is a bit of a messy and hazardous, proposition, and so should always make sure that you are using the pair of gloves that comes with the unit before decanting the resin for all of your 3D printed builds.

Although at first, this may sound like a hassle, it’s not such a bad thing. Manual leveling allows you to better customize your 3D printer based on your preferences. We have also seen so many cases where beginners have had issues using the automatic leveling feature offered by high-end brands because it doesn’t work correctly.

Most people who have bought the Orange 10 can level the platform in less than 15 minutes. Loading the resin into the vat should also be easy especially for people who already have some experience working with resin-based printers.

Assembling the 3D printer is very easy since most of its major components already come pre-assembled as it is. While it is not exactly a plug and play 3D printer, it is still not that difficult to set up, even if you are completely new to the world of 3D prints and printers.

Unlike the Creality Ender 3 or the Photon filament based printers, for instance, the Longer3D Orange 10 3D printer doesn’t require the experience or the expertise to make assembly a very arduous task. It comes with the following:

It is not a difficult task to build this 3D printer. Once you have it well balanced, you should stretch over one of the main elastic bands in order to hold it in place. Once that is done, you may place the other 2 bands for a much more safe and secure fit for a long term solution for all your prints.

The overall build quality of the Longer3D Orange 10 3D printer is top notch, to say the least! The main base unit is not only heavy and sturdy but also feels like it has been made of premium quality. The acrylic cover also feels very sturdy, even though it is only held in place with elastic bands. The same also applies to the power supply as well and it also looks like it has been built to last.

The company offers excellent and full customer service and support and you can also reach them on Facebook Twitter or even via email for all their metal body and non-metal body models. You can also learn from the comments there.

You can even try and send them a name email address and wait for their comment. Alternately you can cancel reply and call them instead.

As the old hackneyed saying goes, the proof of the pudding is in the eating. So too with the Longer3D orange 10 Resin sla 3D printer. No review or any number of reviews can be considered complete without a 3D printed performance review.

Just like most other resin-based printers, the overall detailing and quality of the first print from the Orange 10 tend to be quite impressive. If you are only used to FDM 3D printers alone (such as the Creality Ender 3 or x 5 model for instance), then the overall quality of the resin 3D prints will make you change your mind about these 3D printer models.

While it may not be anywhere as good as the kind of quality that might be produced by any sort of industrial 3D printer model, it does get reasonably close to them. In fact, it is considered good enough even for highly detailed applications such as small 3D miniatures and jewelry.

Since the Longer3D printer model features a very fine layer height that hovers between 0.02 – 0.1 mm, there is no doubt that it would be able to replicate even very minute details, such as facial features on a 28mm scale miniature perfectly well.

Here, it is also very important to understand that the Orange 10 3D printer model also comes with its own special optical path. One that has been properly designed to achieve absolutely uniform light distribution along with intensity. In fact, this feature will radically enhance the overall print quality to a great degree. Especially when compared to any other similarly priced mini 3D printer models available in the market today.

Who It’s Good For

If you are in the market for a top budget 3D resin printer model product that offers mind-blowing details and accuracy and allows you to learn, it is just the deal for you. It has been made specifically keeping the new and novice users in mind. It is easy to assemble and easy to use and comes with excellent instructions that once you read them, would have you printing in no time at all. In this respect, it makes an ideal first 3D printer.

Please do keep in mind the fact that this is primarily an entry-level resin 3D printer. In other words, it is ideal for people new to the world of 3D printing. They can use it in lieu of a standard FDM 3D printer such as the Anycubic Photon and other products as well as other filament based printers.

However, it is important to understand that it cannot be compared to industrial 3D filament printer products as such. This is because of its target market. It is a small home-use 3D printer with only a modest print volume that can do justice to miniatures but not large scale builds.

If you want a machine that can create large builds in record time, you may be better off with using an industrial machine. And if you have one you might want to go back to it.

We would like to conclude this review by stating that the Longer3D Orange 10 Resin 3D printer is one of the best resin 3D printers in its class and it can generate outstanding builds for its price range.