When you first buy your 3D printer, you probably thought: wow, I can make my own free stuff! Well not quite, right? There’s the cost of the printer, maintaining it, and of course, the cost of filament. However, there’s one more cost that you need to factor in: electricity.

So how much electricity does a 3D printer use?

This is an important thing to consider especially if you plan on selling your 3D printing services. Often, we calculate the cost of the material, but we don’t incorporate the electricity cost of running the printer itself! So how much electricity does a 3D printer use?

A typical 3D printer that has the nozzle set to 205 degrees C and the heated bed set to 60 degrees C will draw about 70 watts of power. If you were to run a 10 hour print, that means your 3D printer’s power consumption per hour is around 0.7 kWh. Considering that the average rate of electricity in the United States is $0.13 per kWh, a 10 hour print will cost a grand total of 9 cents.

Of course, these are averages, so let’s get into the nitty gritty.

Determining how much power your 3D printer uses

All printers are different and will use slightly varying amounts of power. The main consumers of power on the 3D printer are the heated bed and the nozzle.

The nozzle is almost always heated using DC power, so if your printer has a 12V power supply at 30 amps, the absolute maximum it can draw is 360 watts. However, this is overkill and you’ll never see your printer actually drawing so much power.

As for the heated bed, some printers use DC power, whereas others use AC power. If your printer uses DC power to heat the bed, it will not draw more than the 360 watts that we mentioned above. However, if your heated bed uses DC power, it will draw an additional few watts along with what the DC power supply is pulling.

The best way to get a very accurate picture of how much power your printer uses is to install a smart plug. 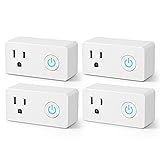 If you use a smart plug with your printer for a few months, you’ll be able to accurately track how much power you’re actually using.

In case you’re setting up with a printer you’ve already had for a while, you can go into the printer menu and reset the statistics(or make a note of the current running time).

Then set up your smart plug, run the printer for a period of time(say a month or so, or 100 hours of printing) and check again.

This way you’ll be able to determine how much electricity your particular printer uses.

It’s also worth noting that the printer actually uses more power at the beginning of the print when it has to heat up the nozzle and bed. That’s because it requires more energy to heat up a cool object than it does to keep an already hot object hot!

Also, a larger bed will use more power than a smaller bed.

Aside from the nozzle and heated bed, other components that draw power are the stepper motors, fans, and the control board.

Since all this is powered from the power supply itself, you’ll never draw more than a total of 360 watts!

If you want to get into the nitty gritty, you can check the mAh consumption of these components, which you’ll find is negligible compared to the nozzle and heated bed.

How to make your 3D printing more efficient

Even though the cost of running a 3D printer is not that high, you may still wish to make it as efficient as possible.

Here are some solutions to wring every penny back from your printer:

Use a smaller 3D printer

But if you’re in the market for a new printer, consider how big your printer really has to be. If you’re not going to print really large parts, just get a smaller printer.

This will have two advantages:

We saw above that the 3D printer consumes the most power when the nozzle and heated bed are heating up. Heat naturally has a tendency to go from hotter to cooler areas, so if the ambient temperature around your 3D printer is quite cool, your printer will have to work harder to maintain the nozzle and bed temperature.

The easiest fix for this is to build a 3D printer enclosure.

Enclosures help to insulate the printer and retain the heat inside the printing area. It won’t be so hot as to melt your prints, but it will help keep heat inside that will prevent your parts from prematurely lifting off the bed, too.

Related: Learn about the different parts of a 3D printer

Most everyday prints can be done with PLA, so to save on your power costs, stick to printing with PLA instead of other filaments that require higher temperatures.

Try printing at the very lowest temperature setting possible that still gets you good results. Any degrees above that is wasted energy.

Also, if your parts don’t have too much touching the print bed, you can even get away without using a heated bed. Just use painter’s tape or glass with a bit of gluestick or hairspray to get good adhesion.

To see the best PLA printing temperature, check out this post.

Since the nozzle and heated bed are consuming the most electricity, keeping them running for as short as possible can also help reduce your electricity consumption.

Here are some ways to print faster:

Be wary of the tradeoffs for each of these suggestions. Sometimes, a gyroid or honeycomb infill is more effective as it gives more strength using less filament. So you may be using a few cents less of electricity, but you’re using much more filament!

Your print speed is also a fickle number. If you try to print too fast and your print fails, you’ll effectively have your 3D printer running for double the time.

Finally, a larger layer height will provide a much different finish that a smaller one.

How much power does an Ender 3 use?

On average, the Ender 3 uses about 0.5 kWh of electricity. However, this is an incredibly ballpark figure and the best way to determine the actual power consumption is to measure it yourself!

I hope this gave you some insight into how much electricity a 3D printer uses. As you can see, it’s quite negligible compared to the energy used by other common household appliances. For example, an air conditioner uses around 3.5 kWh.

The only time you really need to calculate the cost of electricity is when you’re pricing your 3D printing services. Even though it’s just a few cents, it’s good business sense to include the cost of running the printer in your final quote.