Ever since it was released back in early 2017, the Wanhao Duplicator 7 (also known colloquially as Wanhao D7) series of printers has caused quite a bit of a stir in the DLP 3D printer markets of the world, so we’ve gone ahead and done this Wanhao Duplicator 7 review for you.

Back when the Duplicator 7 was released, being able to purchase a fully functional state of the art working DLP printer for a bargain basement price going under $500 was actually quite sensational. From that day, up till now, this machine has now sold many hundreds if not thousands of units all over the world.

The main difference is that the Duplicator 7 is designed for hardcore hobbyists while the Wanhao Duplicator 7 Plus printing unit has been designed to cater to jewelers and the like.

Compared to most of the standard run of the mill filament loading large FDM 3D printers, most of the resin-driven DLP machines are more than capable of printing even very small objects while replicating even the most intricate details from the print files.

This is why there are now so other manufacturers who have jumped on this resin 3D printer bandwagon.

However, the Wanhao Duplicator 3D printer is still one of the most affordable DLP 3D printers currently available on the market today. As a matter of fact, the only real competition it has in its price range comes from the Anycubic Photon 3D printer and other top units like the Anycubic filament based 3D printing units with Z axis. 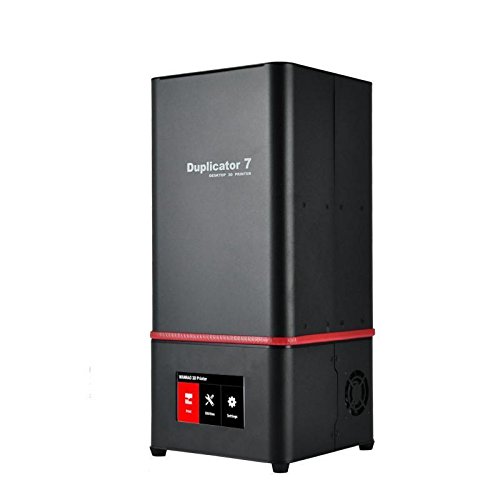 First of all, if you were to read any number of reviews Wanhao you will see that both the Duplicator 7 3D printers and the Duplicator Plus are essentially DLP 3D printing machines. This technology is markedly different from the more common and almost generic filament based FDM 3D printing.

In this case instead of melting plastic filament in the filament 3D printer’s own heated nozzle, both DLP SLA 3D printer use different kinds of liquid resins that are directly cured by light.

The resins in these 3D printers are stored in a tank present in the printing unit. The build plate will dip directly into this resin tank in order to build the desired 3D object. All DLP 3D printers use a technology known as Digital Light Processing or DLP for short.

These machines project an entire image of a layer (in much the same way a projector beams its output) that effectively cures the resin. Once the key raw material, i.e. the resin has hardened sufficiently enough , the build plate will than move up and subsequently the beam projector will then proceed to display the very next slice of the same 3D object that it is printing.

One of the very first things that you will notice straight away about the Wanhao Duplicator 7 3D printer is that the Wanhao D7 appears to be singularly well made and quite sturdy. You can see this when you first view it. Once you try and take it out of the box, you will see that the chassis of this machine has been from solid steel.

Its external dimensions are 35.5*20*20cm. It looks big when you first view it, but it is actually not very large in actual fact.

It is a very strong printer that easily weighs in at around 12kg or so without its UV resin. The Duplicator 7 3D printer comes in black color that has an attractive red seal band going all along the base of the lid of this printer It has been equipped with a heat sink, 70 watt internal power supply and a much larger UV cooling fan, especially when compared to other 3D printers.

Apart from that, the inner mechanisms have also been constructed equally solidly with copious amounts of heavy metal. This particular version has plenty of design features that should be highlighted in any number of reviews of this 3D printer. There is the useful anti-wobble cover on top of the stand beam. Add to that its great touchscreen, cooling fan as well as anti-wobble system.

One of the best features of this 3D printer is that its menus are very simple and equally easy to navigate. There are plenty of large icons that always make it easy to tap and it is an absolute breeze to get the hang of working on this new resin tank equipped 3D printer to get high quality builds.

Another awesome point about this DLP 3D printer is that there are plenty of connectivity options that are available to the user all the time. As a matter of fact, this 3D printer has connectivity USB. On the other hand, the Duplicator Plus offers USB, SD card, Wi-Fi or connectivity through an Ethernet port. Apart from all of the above, you will also have the option of controlling this best resin 3D printer via your computer too so that you will be able to check on your test print and layer resolution of any and all of your 3D printing builds.

It is relatively uncommon to find any liquid resin 3D printer that still offers more than a one or two connectivity options at most. Here, the Wanhao Duplicator 7 Plus really does a great job offering multiple options. However, the original Duplicator 7 3D printer offers only USB, Ethernet as well as Wi-Fi connectivity.

This unit comes fully assembled and is often touted as a simple plug and play unit. All you have to do is to just simply mount the build plate and make sure to add the UV resin. It can be operated with any open source software such as the Nano DLP software. This way, there won’t be any need to buy other stuff besides the occasional resin tank replacement. Not to mention the DLP resin that is.

For added convenience, many users also recommend that you purchase Raspberry Pi 3 software in order to free your PC from its 3D printing duties. It will also help ensure that your prints will be very quick.

We would recommend that you should also check out the video instructions on any number of websites or even any sort of Facebook group in case you need more information when you first buy it and take it out of the box.

Unlike most other 3D printers, the new Duplicator 7 model does not melt plastic filament courtesy a heated nozzle in order to create 3D prints. Instead of that, it uses a UV-sensitive resin that is first activated and then after that used to build your 3D model. This whole process would effectively enable you to create really detailed builds, albeit the pace will be very slow in your creative workshop. We have found that many online retailers offer one year warranty for this top-quality quick shipping product.

As a matter of fact, the new Duplicator 7 resin 3D printer creates very complex items that come with a really impressive level of overall quality. This also includes even models that have their own internal structures. For most 3D printers (like the Monoprice Mini for instance) these are normally very tricky to 3D print, and it is rare for those prints to come out nicely.

The core benefit of using a quality new DLP 3D printer is of course its breathtaking detail level. In this case the screen resolution is arguably one of the single most essential parts of just about any DLP 3D printer. But you should remember that it is not as quick as many Anycubic machines for instance.

Furthermore, its overall build volume is much smaller than many other comparative printers in its price range. This means that with its build volume 120 x 68 x 180mm you won’t be able to print really large high quality prints as such.

This 3D printer has also been fitted with a cutting edge HD LCD touch screen with a resolution of 2560 by 1440 pixels. The overall print speed of the printer is 15-35mm per hour.

The good people at Wanhao HQ offer a veritable host of resins that it might be possible to use on your Duplicator 7 3D printer. But that does not mean that you have to use only proprietary resins alone as it is fully compatible with many 3D party resins as well.

However, here you have to note that if you purchase your resins from other manufacturers, it is imperative that you make sure that their active wavelength is 405nm. You can get in touch with the Wanhao 3D customer support system in case you have any issues.

However, as with any other SLA DLP resin printer, you would not be able to stop the 3D printing process to refill the resin basin. This is why it is imperative that you plan in advance by effectively ensuring that the amount of resin you have is enough for the 3D model before you commence your build in your workshop.

Who Is It Good For?

If you are a hardcore hobbyist or a semiprofessional and want your own set up to create small components and jewelry, than the Wanhao 3D Duplicator 7 is the best 3D printer for you.

It is small enough to be safely used and kept on any workbench at home or in the office and at the same time it can give excellent quality prints with a wide variety of resins. It can use both proprietary as well as 3rd Party UV resins.

This is definitely not the right 3D printer for a newbie since it is not easy to learn, regardless of its entry level price. DLP printing is an inherently messy task and it will require printing, curing and post curing work. Moreover, the smell of the resin can be unpleasant to say the least.

However, you should only purchase either one of them if you are really serious about 3D resin printing in your creation workshop, since they are meant for advanced users only.