The Tevo Black Widow 3D printer is rapidly catching up in the popularity department with its more well-known counterparts, such as the Creality and the Anycubic lineups. The good people at Tevo have upped their game with the Black Widow thanks to its extra-large volume. 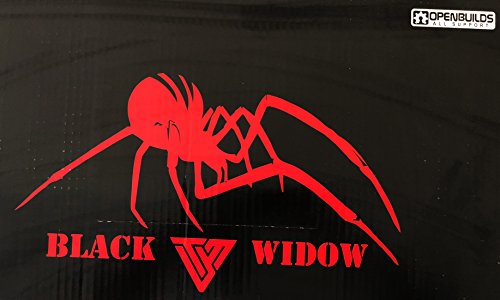 Even the boxes and packages inside the main box are very well designed and equally well laid out. The Tevo Company took the trouble of not using just plain boxes for the smaller components, but branding those as well, for its Tevo Black Widow printer.

Once you decide to build your own Black Widow, there would be no need to try and sort out just one big bag of screws in the Black Widow bag.

However, it is important to note that the Tevo people have not included a test filament with their Black Widow 3D printer. In this case, if your black Widow arrives before your filament order, then you would be fresh out of luck, and you won’t be able to try out your shiny new Tevo toy.

Since the cost of 10 meters of PLA or ABS won’t cost much, this is an oversight made by the Tevo Black Widow 3D printer makers.

When you open all the packets, you will be surprised to know that the Tevo Black Widow comes nearly fully assembled unlike many other printer kits. The distinctive spider design to its parts is one of the coolest looking 3D printers on the market. If you want a bit of bling on your 3D printing machine, you won’t need to do much in terms of paint or stickers.

The Tevo Black Widow 3D printer has the option of using glass as an OEM part separately. The current bed has been well-covered with the ever-popular Buildtak type of surface.

This is good enough for basic applications, but more complicated builds with small parts and protrusions might stick to it and would have to be hacked away.

Since most of the main parts of the Tevo Black Widow 3D printer kit come already pre-assembled, there was not much that had to be done. It is much easier to build this 3D printer than to build a Creality CR-10 3D printer kit, for instance.

This printer has been constructed from 40X80MM extruded aluminum, and assembling it was a lot of fun. The Tevo Black Widow 3D printer kit uses proper T-nuts in its construction.

This 3D printer kit comes with a build manual that is highly detailed and very informative. However, there is a bit of data missing regarding the machine’s cable chain and end stops. But there is no need to worry since the online Tevo Black Widow community has the matter well in hand. There are plenty of forums and YouTube videos that can easily help you construct your very own Tevo machine.

Once finished, you might find the control box of this 3D printer kit a bit flimsy since it has been made of acrylic, but nonetheless, it looks pretty good thanks to the included LED strips.

PLA and ABS Printing with the Black Widow

PLA ABS are two of the easiest 3D printer materials out there that you can print with. However, if you will be using PLA ABS filaments, you will definitely need a cooling fan. Unfortunately, this 3D printer kit is currently lacking a fan. This is a major flaw with this printing machine, and it should be rectified since other 3D printers already come equipped with their own cooling fans.

The biggest issue with PLA ABS prints is that the lack of a fan overheats the bed and the build. If the build is not badly affected, it will at least get stuck on the bed, and you would have to literally hack it away.

This is why it is absolutely imperative that you get a fan for this printing machine. Here it is pertinent to note that ABS may be able to survive a little better than PLA or HIPS without the cooling fan. It also does well on wood PVA too.

Once you get your printer set up, the first upgrade you need to print is a fan. Check one out here.

The machine comes with an 8GB SD card; however, the card is empty, unlike many other 3D printers’ SD cards. As a matter of fact, almost every other printer available in the market has included a few bundles of software such as STL files and sometimes even pre-sliced Gcode files in case the user wants to take this black printing machine on a test drive.

While it is not very hard to copy all of these files in the least, but it is possible that these pre-sliced files might have settings that won’t match the specific filament you have at hand when you start your test print.

Most of the inexpensive 3D printers in the market come suitably equipped with free, open-source software. While Cura comes on the SD card, but that does not mean that you have to be restricted only to this particular system as such.

The beauty of an open-source 3D printer is that there are plenty of other software 3D printing solutions out there. In fact, you can now easily download plenty of them, such as Slic3r and even Craftware.

It is pertinent to note that even if you were to use the top open source solutions, they would still pale in comparison to an actual paid one. Here, one of the very best ones around will easily set you back by at least $150 USD or so.

This solution is known as Simplify3D, and it is one of the best 3D printing slicers around. It is so great because it allows you to customize all of your support structure and thus effectively ensure that you can print very well indeed, irrespective of your 3D prints’ scale.

Upgrades and Modifications for the Tevo Black Widow Printer

This Tevo 3D printer is a great model right out of the box and, as such, doesn’t need much when it comes to upgrades alone. However, you will definitely need to get a cooling fan and spool holder. A glass heat bed would also be a desirable upgrade. You can also go for an auto-leveling sensor holder and a sensor mount.

Moreover, if you still want to upgrade your Tevo Black Widow, you will have to design your own mods. Or alternatively, you can just go through the bunch of free upgrades that many Tevo users have already added on Thingiverse for new and upcoming users of this Black Widow machine.

In light of the above, we can state that the Tevo Black Widow is a great entry-level printer that can handle even large builds effortlessly with PETG, flexible TPU, HIPS, wood, and other materials. All in all, it offers great value for money, at least in the x 250 and the 370 x categories.