PLA and PETG are two of the most popular 3D printing filaments around: so what are the differences between PLA and PETG, and which one should you be using for your prints? Let’s take a look!

PLA and PETG are both polymers and belong to the family of thermoplastics. Thermoplastics are plastics that become soft and melt at a certain temperature, then harden again once they cool.

This property is what enables FDM 3D printers to melt these filaments, lay them down in layers, and produce a final result when they cool down.

The full form of PLA is polylactic acid, and if you’re a fan of organic chemistry, you’ll have picked up on the fact that PLA is fully biodegradable and environmentally friendly!

PETG stands for polyethylene terephthalate glycol, which is very similar to the PET found in most plastic bottles. The only difference here is the glycol molecule which helps prevent the material from becoming cloudy and fragile.

PETG is generally stronger than PLA. If you need heavy-duty prints and want to avoid using ABS, PETG is the way to go.

There’s some conflicting information about whether PLA or PETG has more tensile strength, but it seems that both are more or less the same.

PETG filament has less of a tendency to break when force is applied to it, but it will lose its shape much quicker than PLA will.

PETG filament has greater heat tolerance than PLA does, so if you plan on leaving parts out in the sun or putting them in places hotter than 40-50 degrees C, then stick to PETG.

You would have to consider your specific use before choosing which material to use!

The next point of comparison between PETG and PLA is the result!

Broadly speaking, PLA prints much better than PETG. PLA parts have much neater finishes and are more aesthetically pleasing than PETG prints.

If you’re looking for transparent finishes, PETG is the way to go. PLA is very opaque.

For post-processing, PLA is a better option. If you plan on sanding/polishing/painting/gluing your prints once they’re done, PLA is the way to go. PETG is nearly impossible to glue.

Since PLA is so much more versatile, there are many exotic filaments such as copper, wood fill, and carbon fiber fill that use PLA as a base.

These filaments tend to be nearly as easy to print as PLA, but they have much more attractive surfaces, and in some cases, much greater strength, too.

For example, if you wanted to print some plates for your 3D printer, you could definitely use carbon-fiber filled PLA for the strength you need.

Still, PETG is easier to print than ABS, which has lots of issues with warping and corners lifting off of the bed. Additionally, ABS tends to give off toxic fumes when it melts, a problem not found with PETG.

PLA vs PETG: How to Print

Now let’s get in to how to print PLA and PETG.

PLA is the filament of choice when you want something that’s easy to print. PLA prints without any hassle and is very forgiving, and even if you mess up some settings here and there, you can still get a decent print.

As far as bed adhesion is concerned, PLA is much more forgiving than PETG. You can print PLA without a heated bed, though using a heated bed can be useful.

PETG requires a heated bed temperature of 50 to 70 degrees C, and even then, it tends to stick too well to Buildtak surfaces. My build surface still has a few marks of the first PETG print I tried!

I found it easier to print on painter’s tape with a heated bed instead.

Additionally, you may find that the nozzle height needs to be adjusted between PLA and PETG, even though your bed is perfectly level for a PLA print.

One thing to be extremely mindful of when using your 3D printer with both PLA and PETG is changing the filament.

If you previously used PETG and are now using PLA, you need to heat your nozzle to the temperature you use for PETG and start pushing in PLA until all the leftover PETG has extruded from the nozzle and you only see PLA coming out.

Once you’re sure it’s only PLA flowing from the nozzle, you can lower the temperature. Otherwise, you run the risk of clogging the nozzle when you print at the lower temperature required by PLA.

PLA is made from sustainable sources and is fully biodegradable, which gives it a huge plus in the safety department.

PETG can also be recycled, but it is not biodegradable.

There’s a little bit of debate as to food safety. Generally, FDM-printed parts are not ideal for food usage as the parts are quite porous and little particles can get stuck and become breeding grounds for bacteria.

Finally, PLA and PETG cost pretty much the same. 1 kg spools of both PLA and PETG can be found for less than $25, so the final cost of your prints won’t be that much different with PLA or PETG.

However, a hidden cost of PETG is the higher chance of failed prints, which means you may end up using more PETG filament than PLA filament in the long run.

Finally, there is the environmental cost which must also be considered! PETG is recyclable, but not biodegradable as PLA is. 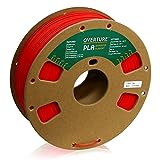 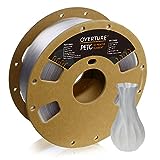 More: which is the strongest filament?

As you can see, PLA and PETG are both unique in their own ways and have their distinct advantages and disadvantages. To summarize: