The thing about Creality is that the company really doesn’t like to rest on its laurels for any extended length of time. As a matter of fact, its all-new CR-10 Max 3D machine is a state of the art machine that most certainly lives up to the great tradition of this Chinese company, as you’ll see in this Creality CR-10 Max review.

The Max version certainly lives up to its name because it expands the CR 10’s venerable and tried and true reputation and increases its volume to an absolutely formidable 450 x 450 x 470 mm. Apart from that it also adds various brand name components as well as many value-added features. All for round about $1,000.

Now the thing is that are these cool and new components are capable of really taking this machine to the very next level. Alternately, here, you have will have to find out if size really does matter or all of this is just plain window dressing or new clothes on the same old warhorse.

This review will help you make up your mind regarding the Creality CR-10 Max 3D printer and it will guide you through all of the more important insights as well as experiences that you need to understand regarding this 3D printer.

If you were to read any other review, you will see that this is a very popular model printer for not just hobbyists but also serious users too. In keeping with the CR 10 3D printer tradition, the ‘Max’ version is also like its predecessor models, in the sense that it also comes suitably well-equipped with a really large build plate just like any other 10 series printer from Creality. 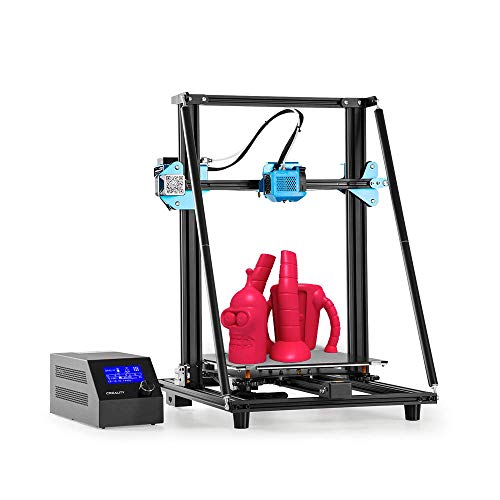 Apart from that its print quality is also very good when compared to most of the other models that are currently available today.

What Firmware Does the CR 10 Use?

As a general rule, both the Max and the usual 10 have the same firmware. However, it also depends upon motherboard to board and V1.1.2, the V1.1.3 and the V1.1.4 all use different ones.

This machine has been equipped with a design feature that the good people at Creality HQ colloquially refer to as the “Golden Triangle.” Of course, one should not mistake it with the key Asian region that bears the same infamous name.

On the contrary, here the triangle being referred to is the Z-axis brace. The one that basically connects the upper part of the frame to the CR 10 Max printer’s base.

The main aim of this design feature is to provide the CR-10 Max 3D printer a much sturdier frame that will help you to get rid of not only excess vibrations but also any inherent wobble of this extremely important axis. In the long run, it will serve to ensure that your 3D builds will always have a completely uniform and smooth finish. One that is quite characteristic of the Creality CR 10 Max 3D printer model.

This feature is actually in keeping with the older CR-10S Pro version of this 3D printer. The 10 Pro precedes the 10 Max and the latter has further refined the auto-leveling function of the former.

It has a state of the art inductive probe that is present on its main print head. It also possesses a matrix leveling routine. One that basically uses this feature to measure the entire series of reference points all over the print bed. This will result in zonal compensation and, after that, a completely level set of first layers of your precious build.

The Creality CR-10 Max 3D printer has been equipped with a dual nozzle system: The standard one is 0.4mm, while the bigger 0.8mm nozzle can be used for much faster prints.

The bigger pin can definitely turbocharge your builds. In this case, at least, the bigger nozzle is a complete game-changer, especially when it comes to creating extra larger sized models. After all, that is what this 3D printer has been designed for.

A 450 x 450 mm print bed of the 10 max 3D printers is as big as it can get. This is why it also requires a really sturdy and strong assembly that will also help to shift all of that weight. This is why the engineers at Creality have doubled up on the various belts that pull the printbed of the 10 Max 3D printer.

This is a very interesting new direction for Creality. Since the print bed is so humongous, it has also decided to include a split-flow power supply to ensure an uninterrupted flow of juice into the system. It pushes around 24V to the bed and it is completely independent of the motherboard of this machine. The idea behind it is very simple.

The company lays claim to the fact that this arrangement substantially reduces overall electromagnetic interference in the system. The key benefit of this whole setup is that it enables the uber large bed to heat up as quickly as it is possible to do so.

Unlike many other printers, you won’t have to go through the really agonizing wait that is more of the norm rather than the exception when it comes to competing 3D printers. As a matter of fact, the sheer speed and rapidity of the heating process allow this printer to surge ahead of its class.

The 10 Max 3D printer ships with a very distinctive Bowden tube by Capricorn Tube. This brand is known for its deep blue hue. In this case, Capricorn tubing provides not just a very high level of lubricity but also a temperature resistance to the whole of the extrusion setup. It would not be wrong to state that this is a top of the line premium inclusion.

However, the long tube may droop due to the level it will have to span so it is a good idea to use a very hard filament for optimum performance.

The usually recommended print speed of the CR-10 max 3D printer hovers around 50mm/s, and it differs from filament to filament.

What Is the Difference between CR 10 and CR 10S?

Both of these printers have really large print areas However; the latter model, i.e. the 10 Max 3D printer has the ability to flawlessly switch in-between nozzles. Once you swap the .04mm nozzle with the .8mm you will be able to finish your builds much faster. Both of these CR 10 printers are available on Amazon and there are plenty of customer reviews on them.

Materials it can Use

Who it’s good for

The CR 10 Max 3D printer offered by Creality is everything you want in case you are interested in printing very big objects on a tight budget. After all, there currently exists no better upgrade that can ever be able to compensate for the much larger print volume of this specific 3D printing model.

Who it’s not good for

If you are a student on a really tight budget, it would make a whole lot of sense to stay far away from this particular 3D printer model. This machine has been created for the professional or the ardent hobbyist. In other words, people who require a really large print bad for their cosplay and professional needs.

This is a really nice 3D printer and offers great value for money, especially if we vector in its extra-large size. It is very big, and it also heats up very quickly as well. It comes with a veritable plethora of value-added features. Best of all, you can fine-tune it to your own exacting requirements to create a sleek and reliable machine that will obey your every command.