The manufacturer Anycubic has a number of 3D printers in its Kossel line up. From the Kossel Delta printer, all the way to the supersized, remodeled, and upgraded version known as the Kossel Linear Plus.

This 3D printer builds upon the older Anycubic Kossel pulley version and is different because of two key features. The first one being the fact that it has effectively ditched the main pulley version of the locomotion system, of the older model. In lieu of that, it has switched to linear rails with integral guides.

This enables the appropriately named Linear Plus to pack a larger printbed which is the other main differentiating factor with the regular delta version of the Kossel. We will discuss them in detail in this review Anycubic. 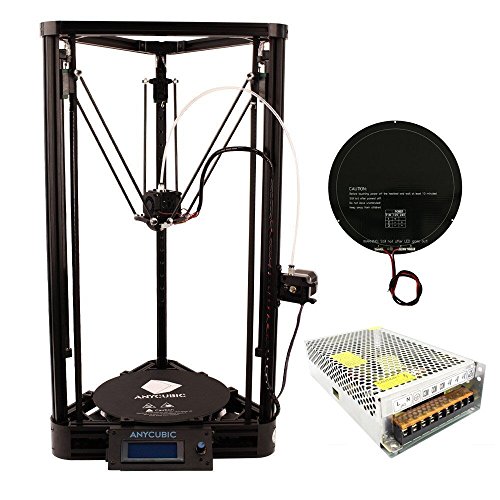 Let us take a quick look at some of the top features of this version of the Anycubic Kossel that you might like.

The Anycubic Kossel in its Linear Plus iteration comes at a very distinctive price point (of approx. $200 to $300) like its counterpart Kossel Delta. This makes it an excellent printer for many people on a tight budget.

The 3D printer boasts of multiple linear guides that have been put in place of the pulley version system, not like other printers 3D for best 3D printing. This move is calculated to bring marginally greater accuracy, stability, and repeatability as compared to the smaller Anycubic Kossel Delta as you will see when you read the rest of this review Anycubic.

Linear guides are often used by many top-end manufacturers due to their very low-friction as well as a superior response when it comes to repeated fast movements.

It is for this very reason that the Kossel Linear Plus by Anycubic is pitched as being the best 3D printer and printing machine for those in need of both high precision as well as durable and long-lasting performance comparable with any other Delta printer.

While expert opinions tend to be diverse, however, there is definitely a noticeable difference in terms of overall print quality between the two.

It is a pretty safe bet that the linear guides will always require considerably less maintenance in the long run. Moreover, they are also less likely to either loosen or degrade over time. This will also mean less performing maintenance related issues than the pulley system in other Kossel 3D printing machines.

However, it is pertinent to note here that many linear guides might turn out to be noisier than their pulley counterparts. This means that there are at least some small drawbacks that you will have to contend with, in order to enjoy that extra precision.

In terms of large 3D printers and printing units, we can assert that it puts it in roughly the same league as let us say, the Prusa i3 Mk3+ as far as the print size alone is concerned.

However, it is important to remember that the overall print volume on a delta 3D machine will always taper off due to the lesser reach of the arms. This is because they have to rise up their respective rails to start 3D printing.

It is also worth noting that the print bed on this 3D printer is heated and it comes with an integral Buildtak type of sticker for better adhesion of your 3D printing builds. Furthermore, it is also capable of reaching 100 degrees Celsius as well. Like the Kossel Delta. This temperature may be pretty standard for most printers, but not all as we will see in this 3D printer review.

Automatic bed leveling also comes as a standard component of the basic package, with the print head descending to the bed and also making contact with it across a whole matrix of points. This is an awesome feature that is definitely missed in many, if not most 3D printers in this price range.

Unfortunately, this particular Anycubic Kossel 3D machine is not able to utilize it properly. In fact, it might be considered one of the weaker of the Anycubic Kossel Linear Plus due to its poor hardware and buggy firmware. However, a little fine-tuning and tweaking can take care of the problem easily enough and you will have a 3D printer that would be able to level its base automatically, as and when you want.

As is often the case with a whole lot of relatively inexpensive 3D printer kits, the overall quality tends to vary, from piece to piece. But by and large, the silent majority seems more than happy with this Kossel 3D printer.

In this case, it would not be wrong to say that the overall consensus seems to be quite positive, to say the least. In fact, the Anycubic Kossel Linear Plus has regularly been garnering great user 3D printer reviews all across the board.

It comes semi-assembled as a flat-packed kit and that is a great advantage over unassembled printers. This is why at least some assembly is required and therefore it is not your average plug and play 3D printing machine.

However, the good people at Anycubic point out that at least 80 percent of the total build work for this Anycubic Kossel Linear Plus 3D printer is already complete, as it is. The electronics, rails, heated base, and print head with its own effector all come pre-assembled, as it is.

This is a great way of saving time and printing rather than building the machine, together with any other printer. But only as long as you follow the manual. However, performance will also vary on the type of filament used. Especially if you juggle from one filament to another filament, while 3D printing.

In the oblong box you will find included the following items:

It will take you a couple of hours to build this Anycubic machine. The instructions do a fairly good job of telling you exactly how to run the cables as well as install all the vital components and parts. For an expert, it might be possible to get the whole thing up and running in an hour, but the newbie might have to be a bit more methodical, lest he gets a few things wrong and has to start all over again.

With the linear guide, you need to be very careful when you start installing them in case the carriage runs off its track.

Once your brand new 3D printer is all set up, it will automatically take you through the Cura slicer software. The instructions are very clear and it will ask you to use Deltabot.

You will also have to try and follow the instructions in detail when you decide to level the base. They are a bit complicated as has been said in a lot of reviews regarding this Kossel 3D printer.

All the instructions are there for both assembly and subsequent usage. You will just have to read them properly and in case you don’t understand anything, re-read them again a few times till you get them right. Be certain to only use the Deltabot Cura profile software, otherwise, your brand new 3D printers might end up printing a few inches in the air!

If you still don’t understand something you can always write to them by sending your name email address. Just be sure not to cancel reply once they get back to you.

Always remember that the included manual and accompanying software has your back. Just make sure to follow them. Otherwise, you will have to go back and forth from 3D printer review to 3D printer review, till you get it right.

When it comes to actual printing for the first time, the bed leveling procedure may turn out to be a bit long, and using it is a little cumbersome. Not like Ender 3. In fact, many users have found it arduous.

This holds truer if you have to do it multiple times once you start using it. However, after you have the Z Offset saved in the system, you would not have found any issues or problems with the auto leveling going forward. This is because the bed itself is static, and does not rest on springs. In the long run, there will be no movement so there is no need to go ahead and level it each time you 3D print something.

When the Kossel 3D printer starts to print it does generate a bit of a racket. In other words, it is definitely not the quietest 2D printer on the market. However, it is by no means the loudest either. Just slightly above normal volume for any other filament based 3D printer

However, if you were to use TMC2208 stepper drivers and place this 3D printer on a foam surface, the Kossel will become even quieter (as per user comments).

As regards overall print quality, it can be said that is pretty good thanks to Marlin firmware. There are clear cut layer lines, and there are no blobs or zits here. Just pure smoothness of the 3D prints! And since it is a delta filament based 3D printer (with accuracy 0), it is pretty fast.

Who It’s Good For

If you are on the lookout for a really inexpensive budget 3D printer that is both fast and accurate and gives decent builds, you can’t go far wrong with this one (the same applies to the Creality Ender 3 or even a resin 3D printer).

The Anycubic Kossel has a price tag that would be palpable for all kinds of new and novice users who want to bring home a 3D printer for their entry into the 3D printing world. It is not too difficult to assemble and easy to use and comes with first-rate instructions that would have you 3D printing in no time. Especially with PLA.

In spite of its many features such as automatic leveling, It is still primarily an entry-level Delta 3D printer. In other words, it is good for the student, the hobbyist, and the newbie. But it is by no means a professional level 3D printer at all. On the contrary, it is basically a small home and workshop -use only 3D printer.

In that role, it is one of the best 3D printers in open source around and has few equals and hardly any superiors. However, if you were to try it for really large builds, you will be disappointed, since you will need an industrial machine, and if you have one you might want to go back to it.

The Anycubic Kossel Linear Plus is a fast printing, low-cost, and very well built 3D Printer.  It prints pretty well for its price range and also delivers great quality output at very high speeds. Taking everything together, this machine could be a helpful and nifty go-to 3D printer for the first time buyer. It is available on Amazon.

Learn how to make money 3D printing and turn your hobby into your main income.